There are plenty of stocks in the market capable of producing excellent long-term returns, especially after the recent market downturn. However, finding stocks that are excellent fits for your retirement portfolio that can quintuple your money while still allowing you to sleep soundly at night in the meantime is another matter.

Of course, everyone’s retirement timetable is different. If you plan on retiring in 30 years, it is considerably easier to turn $100,000 into $500,000 than if you plan to retire in a decade. So, for the purposes of this discussion, we’ll use a 20-year time horizon, but the numbers here are somewhat arbitrary. In other words, these are four stocks (all of which I own in my retirement accounts) that are great additions to your retirement portfolio no matter when you buy or how long your retirement time horizon is. 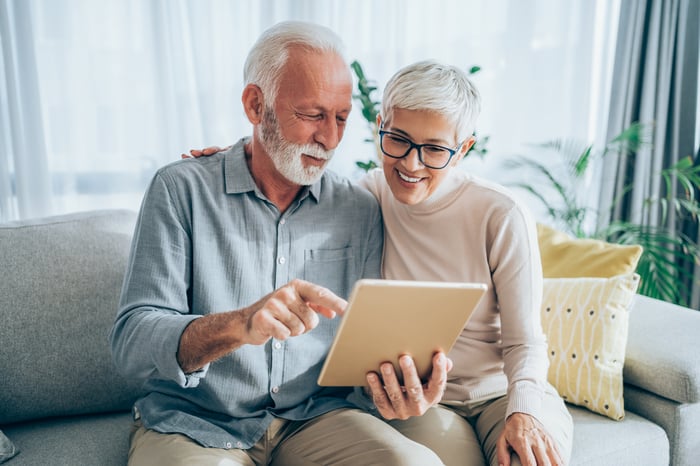 Built for steady growth and income

If you want to find stocks that can 5x your money by retirement, one good way is to look at the stocks that have done it already for investors. Realty Income (O -1.58%† is a real estate investment trust, or REIT, that invests in single-tenant commercial properties and has delivered a 15.3% annualized return since its 1994 NYSE listing. To put this into perspective, a 15.3% rate of return would turn $100,000 into $1.7 million in 20 years.

Realty Income is built for steady growth and income. Its tenants operate primarily recession-resistant and e-commerce-resistant businesses (think grocery stores, drugstores, etc.), and sign long-term leases with rent increases built in. Realty Income is also an excellent income stock to hold after you retire. It currently pays a dividend yield of about 4.4% in monthly installations and has increased its payout for 98 consecutive quarters.

If I could only own one stock

I’ve said before that if I could own only one stock, it would have to be Berkshire Hathaway (BRK.A -1.07%†(BRK.B -1.27%†† The conglomerate owns a portfolio of more than 60 excellent businesses as well as a $350+ billion stock portfolio and is designed to be a long-term compounding machine.

To be sure, the Warren Buffett-led conglomerate isn’t going to replicate the incredible 3,641.613% return it has generated for investors since 1965, but that’s OK. What it can do is deliver market-beating returns over time, and with relatively low volatility. I’ve invested plenty of my own money because I believe it will do just that.

A powerful force in entertainment that will only get stronger

Walt Disney (DIS -1.98%† has an incredible media empire that is going to emerge from the COVID-19 pandemic even stronger than it went in. Early indicators are that its theme park business is generating substantially more revenue per guest than it ever has, movie audiences are coming back to theaters, and Disney’s other entertainment assets, such as its cruise lines, are seeing excellent demand.

On top of that, the Disney+ streaming service ended up reaching its five-year goals within its first year and has created a new stream of recurring revenue that is still in the early stages of its evolution. With shares trading for about 15% less than they were before Disney+ even launched, it looks like an excellent entry point for long-term investors.

Could this become the world’s first $6 trillion company?

Last but certainly not least, Amazon (AMZN -2.52%† has been under pressure lately, and to be fair, there are some good reasons. Revenue growth in the most recent quarter was the company’s slowest in over two decades, and a US recession could lead to a major slowdown in consumer spending.

However, Amazon is still an e-commerce powerhouse that is the dominant player in the market. With less than 15% of all retail sales taking place electronically, the core business could still have a long way to go. Amazon Web Services (AWS) should be a major beneficiary of the rapid increase in cloud spending that’s expected. And there are other growth opportunities that Amazon has barely begun to scratch the surface of, such as healthcare and grocery. Amazon currently has a market cap of about $1.25 trillion, but as the business evolves, it could potentially grow to five times that size over time.

Buy with the long term in mind

All of these are excellent, well-run businesses with enough growth potential to create serious wealth by the time you retire, and with relatively low downside risk. However, I have absolutely no idea what any of them will do over the next few weeks, months, or years. Invest accordingly.

Is It Really Safe to Invest in the S&P 500 in a Bear Market? † Smart Change: Personal Finance

A Visual Guide to the Power of Holding Through S&P 500 Bear Markets | Smart Change: Personal Finance