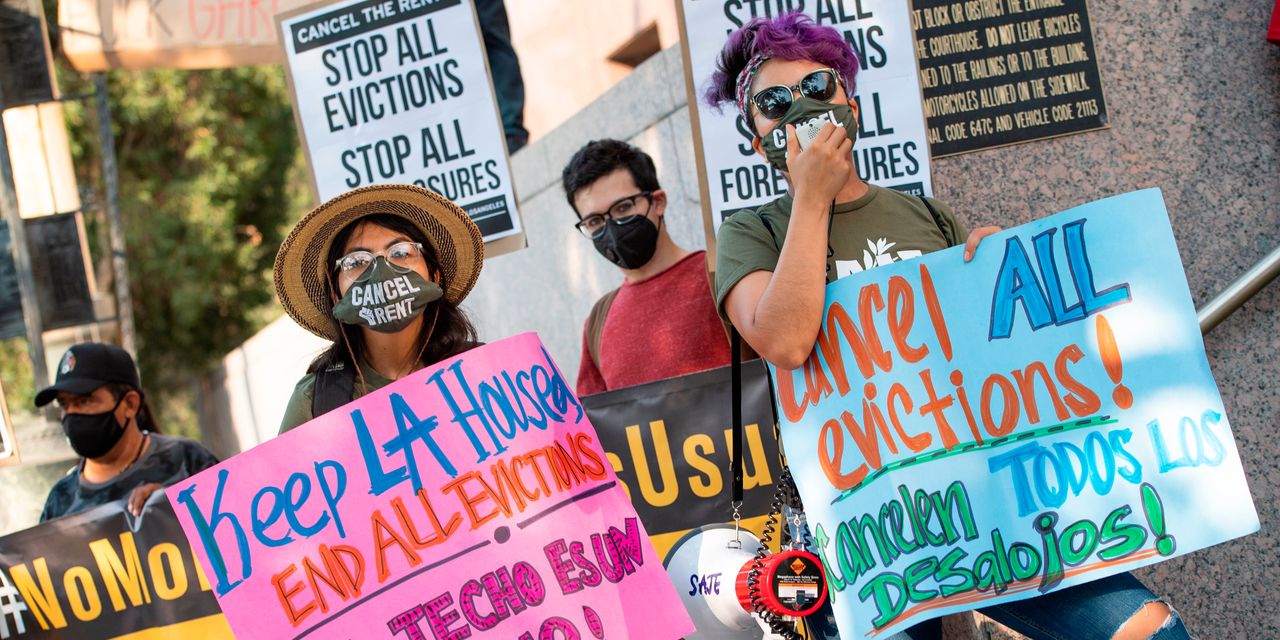 Damon Blanchard, a 46-year-old living in Columbus, Ohio, is unemployed but gets a biweekly workers’ compensation check worth about $686 after getting hurt on the job in a scrapyard three years ago, he said.

Last year, an investment firm purchased the apartment complex Blanchard is living in — which he said is largely home to people of color — and ultimately bumped his rent up from $450 to $970 in January. Because of that, he’s currently spending almost all of his income on rent.

Like many tenants have done since the start of the pandemic, Blanchard tried to organize with his neighbors and fight back against his landlord’s rent increases, though he said the investment firm that acquired his complex, Vision and Beyond, was unwilling to negotiate with renters as a group.

†‘Things are changing, but they’re getting worse for the citizens of the nation. Anybody that’s middle class and below, we’re screwed.’†

The company did not immediately respond to MarketWatch’s request for comment, but has previously told local media outlets that it is investing in much-needed safety and building improvements and that any rent increases were in line with comparable rental properties in the area.

“Things are changing, but they’re getting worse for the citizens of the nation,” Blanchard said. “Anybody that’s middle class and below, we’re screwed.”

Blanchard may be more vulnerable than households with one and two incomes, but he is not alone. If you’re renting your home, chances are you’re paying more than you’re used to.

The Labor Department said Wednesday that its consumer price index had increased by 8.3% in the 12 months ending in April, with the index rose 0.3% last month alone. While inflation has actually slowed down a bit, Americans are still bearing the burden of a higher cost of living, particularly when paying for shelter, food, airline fares, and cars.

Housing costs — which, for a middle-income household, might take up a third of a family’s take-home pay — have jumped by 5.1% in the past year, the fastest annual pace since 1991, while rents are up 4.8% from a years ago, according to the Labor Department.

While it’s not too surprising that shelter costs are rising, “it is concerning,” said Daryl Fairweather, chief economist at Redfin. There’s not much that can be done short-term to curb rent inflation outside of raising interest rates, which the Fed is already doing, she added.

†‘It’s just unfortunate because there are people who are going to walk away effectively poorer.’†

“I don’t think that we are anywhere near out of the woods yet in terms of how much rents are going up,” Fairweather said. “It’s just unfortunate because there are people who are going to walk away effectively poorer.”

The increases basically represent a readjustment period after the economy was effectively switched off and on again during the pandemic, which reset housing prices in a market that already didn’t have enough units to go around, Fairweather said.

Still, that kind of swing is nothing to sneeze at, and can have particularly dire consequences for low-income households without a lot of breathing room in their budgets. Rent increases are also likely to disproportionately burden Black and Latino families, who were more likely to spend 30% of their income on housing even before the pandemic.

Housing advocates like to say that “the rent eats first,” acknowledging that people will bear higher housing costs while sacrificing their standard of living. In the near-term, in other words, low- to middle-income tenants may be able to make the rent hikes work at the expense of their savings, health, and even their future ability to own a home.

If not, they might face eviction or homelessness, which can have further catastrophic consequences on their financial and physical wellbeing and, ironically, make it harder for a tenant to find a new place to rent.

affiliate in Phoenix, recently reported, some Arizona landlords are turning away quality renters just because they previously accepted financial assistance from the government or a nonprofit to help with pandemic housing costs, and landlords have long discriminated against tenants with evictions on their records.

On Wednesday, President Joe Biden said his administration will step up efforts to fight inflation.

“I’m going to keep fighting for family farmers like Jeff, so they can do what they do best. I hope Congress is going to join me,” the president said, speaking at a farm in Kankakee, Ill., owned by Jeff and Gina O’Connor.

In its latest budget proposal, the Biden administration said it will increase the US Department of Housing and Urban Development’s funding by nearly 21% to $71.9 billion in 2023.

†The Biden administration said it will increase the US Department of Housing and Urban Development’s funding by nearly 21% to $71.9 billion in 2023.†

As Realtor.com noted of Biden’s plan: “The aim is to expand rental assistance to more low-income tenants struggling to pay their landlords, increase the number of affordable housing units available, and help more Americans become homeowners. There is also money in his budget earmarked to fight housing discrimination.”

(Realtor.com is operated by News Corp subsidiary Move Inc., and MarketWatch is a unit of Dow Jones, which is also a subsidiary of News Corp.)

Still, critics say more needs to be done. Biden, for instance, barely mentioned rents in his State of the Union address last February even though rents have been skyrocketing for some time, further complicating Americans’ ability to save for a house.

Damon Blanchard, meanwhile, is still waiting for more government support in his own fight against rent hikes by landlords. “There’s no policies to protect the people,” Blanchard said. “It’s all corporate-driven, it’s all capitalist-driven, it’s all money. And because we don’t have it, we have to organize to fight for ourselves.”

US economy is ‘nowhere near a recession this year,’ says economist