By DITA ALANGKARA and VICTORIA MILKO

DEMAK REGENCY, Indonesia (AP) — The rice fields are washed away. Coconut trees and chili plants, flooded with salt water, are all dead. The farmers’ fish ponds fail, the water getting so high that the fish swim over the nets. And trash carried by the tides float in and out of homes with doors that no longer can be shut.

On the northern coast of Central Java, Indonesia, villages are hit hard as sea levels rise, one of many effects of climate change. Many homes have been “raised” with cement or dirt several times over in an effort by occupants to keep dry. Others can only be accessed when the tide is low, trapping people inside for hours at a time.

Many villagers have fled the area, becoming climate migrants seeking new lives in places that are drier and higher above sea level. But others haven’t left their flooded homes — some by choice, but many because they lack the money to move.

The Associated Press recently interviewed and photographed people who have stayed in the villages of Mondoliko and Timbulsloko, doing the best they can to live amid constant flooding. Here are the stories of 10 families.

Zuriah, who like many Indonesians uses only one name, stands in front of her flooded home. The only remnants of the land she once owned are the dirt-filled flower pots that sit on a wooden platform above the water in front of her home her.

Without the means to move, Zuriah continues to live in the house even as nearly all of her neighbors leave. When The AP first visited the village in November of last year, 11 homes were still occupied. By July 2022 that number dwindled to five, including Zuriah.

Zuriah says she’s on a list to receive aid from the government, but nothing has happened so far. She’s been told to be patient.

Living in the home has meant learning to adapt. Inside, she points to the electrical socket that’s been moved up several times on the wall to decrease the risk of electrocution when there’s high tides. The wall bears water marks that show how high the water gets, sometimes less than a foot below the latest electric socket position.

Zuriah’s daughter now lives with relatives outside the village so it’s easier for her to attend school. She says her daughter her worries about her, but that she tells her that she must get an education so she can chase her dreams her.

When talking about whether she wants to move away from her flooded village, Dwi Ulfani begins to cry.

Ulfani and her family have been living in the flooded family home as long as she can remember. Outside the house, the yard where she used to play with her friends is now filled with water about 8 inches high. The home’s concrete terrace is occupied by swimming guppies. Inside the home a snake slides out of the flooded kitchen, into the sea.

While Ulfani is studying airport management, her father and mother are planning to move. They would have preferred to have already left, but say that they don’t have the money right now.

When asking Ulfani what she wants to do after school — stay in the village or move elsewhere? — she cries, then responds in a whisper, “Move.”

Sri Wahyuni ​​sits in the raised wooden doorframe, watching as fellow villagers occasionally pass by on the raised wooden platform above the water. Her terrace Her, already elevated by layers of concrete, is under about four inches of water.

Wahyuni ​​and her husband Jaka Sadewa moved to the village after they got married in 2018. She says that when they moved here the water wasn’t like this; You could still ride motorcycles along the main road through the village, and the water level always went back down to normal.

But as time went by, Wahyuni ​​noticed that the water often did not recede, resulting in more flooded days for their home. They decided to do what they could to elevate their home above the water — adding layers of concrete at first, eventually building a permanent wooden level above the water. Despite this, the water still comes into the house occasionally. Still, if they hadn’t raised the house, they’d be neck-deep in water, says Wayuni.

Their 3-year-old son Bima sits in Sadewa’s lap. While Wahyuni, who grew up in the village, remembers playing in rice fields, watching adults harvest corn and seeing snakes glide through the grass, her son Bima won’t have the same experiences in the village. She says he will have to adjust, but she also hopes he has the opportunity to live elsewhere by the time he he grows up.

“I’m worried that every year the water will get higher. But we don’t have any resources,” she says. “If we had resources, we would move out.”

Kumaison remembers the time she cried when a bad flood washed away the 400,000 Indonesian rupiah (US$27) she had been saving. Other items, like clothes and furniture, could be cleaned and repaired. But the money was gone forever.

Growing up in the village as a young girl, Kumaison says she remembers her neighbors’ rice fields and shrimp ponds as a thriving business.

But now, “Everything is gone, can’t harvest shrimp or fish. It’s changed everyone’s livelihoods,” she says.

Kumaison says her home has been raised with concrete and dirt three times now, each time being followed by even higher flooding. In the flooded front yard, villagers have helped her build nets that help catch trash, preventing it from floating into her home her. She has trouble sleeping at night, worried that the floods will get even higher in the middle of the night.

Kumaison’s son lives in a village close by and has offered that she move in with him. But despite her worries her, Kumaison says she does n’t want to leave, as she enjoys the company of friends and the community that she’s known for decades.

Water-damaged books lay drying on the elevated wooden terrace of Munadiroh’s home, while a floating white tub used to transport items in the water is tethered nearby. With no land left in the village, two chickens rustle in a tree nearby, causing the only audible noise in the entire village.

The village has gotten quiet since nearly every family left due to constant flooding. Even the local mosque, where Munadroh’s husband served as a cleric, has stopped the trademark calls to prayer that would usually play five times a day.

With no other home or financial resources to move, Munadiroh and her family stay in the village. Her child her, grade-school age, makes the long journey to school by wading through the water and riding in a boat several times a week. Sometimes the home still floods, and Munadiroh says she keeps working to dry as many things as she can in the sunlight each day.

Sudarto lays on the bed in his flooded home, stepping into water to walk out on to the terrace. On the wall are water lines, some up to 30 centimeters (1 foot) that show how high the floods have gotten in his already-elevated home his.

Turiah, his adult daughter, lives in the home with him. Born with a physical disability that prevents her from walking, she spends her days sitting in the home’s front window on an elevated wooden platform.

Like many homes in the village, the windows are partially immersed in the sea water that is a permanent fixture inside. In some areas, barnacles and mold rings cling to the walls. Personal items, such as a refrigerator, clothes and an old clock, are kept on wooden platforms elevated above the water from the rising sea level.

Mar’iah sits in a chair at the end of the village’s elevated walkway, her flooded wooden home not far behind her. A widower, Mar’iah lives alone with no one to help care for her daily needs her.

With most trees dead from the sea’s saltwater, there’s no shady place she can sit outside her home unless she’s willing to wade through flooded water.

In a soft voice, Mar’iah explains that she sits in the chair every day waiting until her house is dry enough to enter again. Unlike neighboring villages, there’s no dirt left in the village that could be used to help elevate the home’s floor. Wooden platforms used to previously elevate the house have already flooded and remain underwater.

Mar’iah’s remaining neighbors say they have heard that a nearby village has received government aid, but help has not come to Timbulsloko.

Ngatiroh says that after her mother Suratmi’s home collapsed due to flooding, she moved her into the windowless, dirt-floor home that they now share. Damp, moldy air hangs in the room as Ngatiroh walks through it while her mother her lays on a bed in the living room.

Ngatiroh’s home has not been spared from the floods either though, she says. They’ve used layers of dirt to try and raise the floor high enough to keep dry the mattress that Suratmi lays on throughout the day. The home’s kitchen has permanent standing water, while chickens use the back room as their grazing ground since the backyard disappeared to floods long ago.

Ngatiroh says that she wants to move to a new, drier home, but the family lacks the financial resources. Instead, she says, she will just keep adding layers of dirt to rise their home above the rising water, trying to keep her aging mother safe.

Sitting on the porch of house she was born in, Wahidah and her friends chat as they avoid the heat of the sun.

She recalls how when she was little she would see buffalo roam through the village’s fields where rice, corn and chilis would grow. Some neighbors kept fish ponds filled with catfish they could sell at the market or eat themselves.

“Everything we needed was here,” she says.

She remembers how the water began to rise. The fields and trees all died from the salt water. All the buffalo were sold as there began to be no land to safely keep them. Even the fish ponds failed, the water getting so high the fish could jump over the netted walls. Eventually the graveyard became flooded, with the dead being buried further away.

“It’s just like the ocean here now,” she says.

These days, a man comes on a boat during the week to sell them the things they used to be able to grow or raise for themselves. Houses have collapsed around them.

Wahidah says she knows about 40 people who have left, moving to other parts of Java that haven’t permanently flooded yet.

“I think the younger generation should move. If they have money they should buy land. But I don’t have money right now, so I stay,” she says.

Crabs scuttle through the water where Sukarman’s yard used to be.

Sukarman has lived in the village for most of his life, working as a handyman and staying close to his family. He’s raised his house his and the land around it two times, but the floods still come into the house. He says he gave up trying to raise the land again.

“We’ve already done it twice and it hasn’t worked, so what else can we do?” he says.

Sukarman thinks younger people, such as his granddaughter Dwi Ulfani, should move away if they can. But he knows that with no money or other family homes, he’s likely to spend the rest of his life living in an increasingly flooded home. 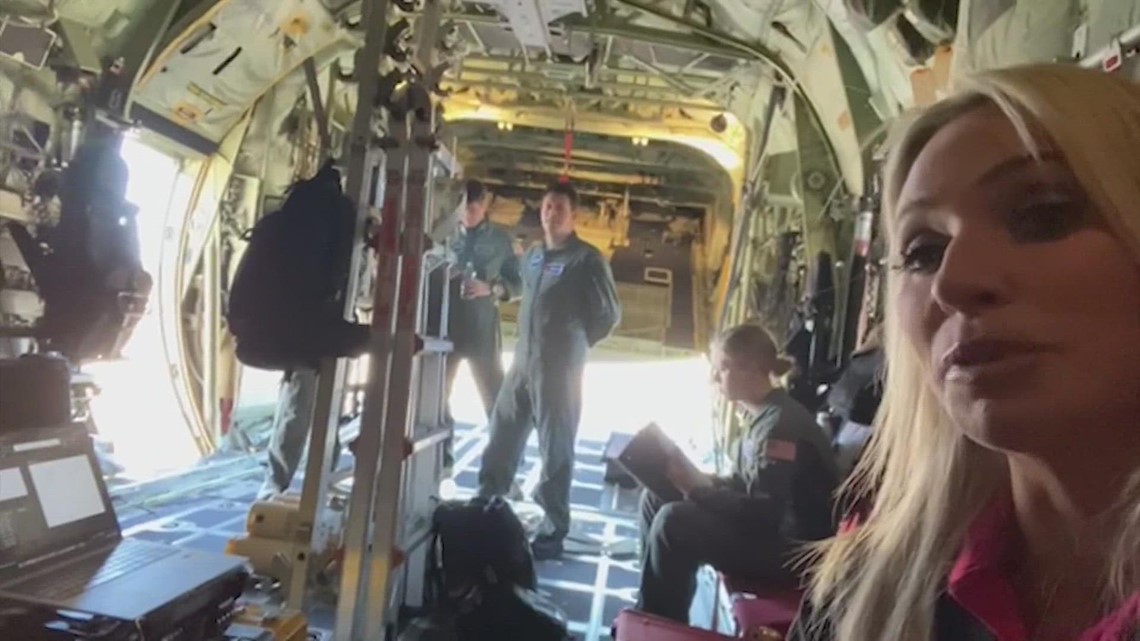 Chita Craft will fly on Hurricane Hunter as it measures Ian

In the ocean’s twilight zone, a fish that could feed the world – or destroy it | marine life