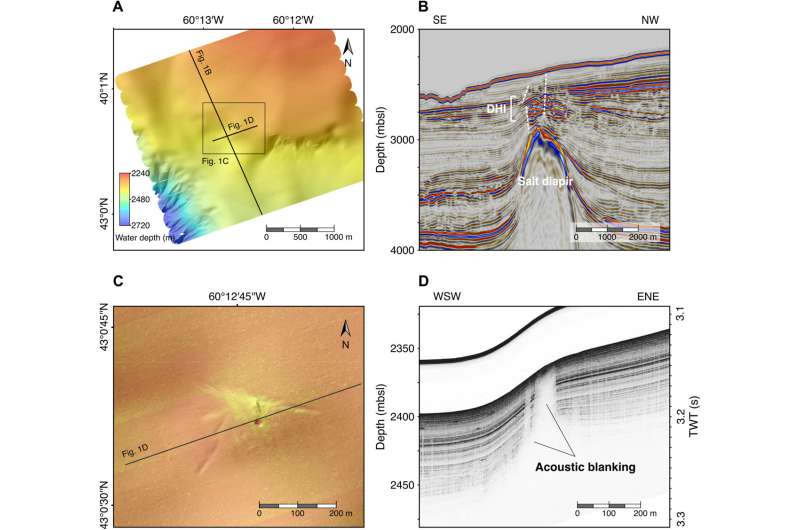 A team of researchers affiliated with multiple institutions in Canada, working with a colleague from the US, has found evidence of long-lived sub-seafloor bacteria seeing up into the ocean and traveling long distances via currents. In their paper published in the journal Science Advancesthe group describes their genetic study of bacteria samples collected from the seafloor.

Prior research has suggested that huge amounts of bacteria live under the world’s oceans, some up to thousands of meters deep. Those at such depths enter a suspended state, waiting for favorable conditions to arise. When that happens, the bacteria awaken and resume their activities.

Prior research has also shown that some of the bacteria that live under the sea consume oil that seeps from the floor up into the sea. Research has also suggested that some oil-loving bacteria seep into the ocean along with the oil. In this new effort, the researchers learned more about such bacteria by first finding oil seeps and then by capturing and studying the bacteria they contain.

The researchers found oil seeps by conducting acoustic surveys on a part of the continental shelf off the southwest coast of Novia Scotia. They sent down an autonomous submarine to investigate the seeps. Next, they lowered tubes from a ship to the oil seeps and sucked up mud samples from 14 sites across a wide swath of ocean floor.

Back in their lab, the researchers heated the samples to awaken dormant bacteria—those that were not the kind they were looking for were killed by the heat. Then, the researchers sequenced the DNA of the remaining bacteria. They found that those living in the oil had genetic differences to those that did not live in the oil.

They also found that those that did live in the oil were nearly identical to those that lived in oil seeing from sites thousands of meters apart on the ocean floor. The researchers suggest this indicates that once dormant oil-eating bacteria make their way to the ocean, they awaken and travel thousands of kilometers in ocean currents—a process, they note, that could take decades.