John Blangero’s accomplishments go beyond another story of New Castle boy does good.

Blangero, a native of Mahoningtown and a resident of Port Isabel, Texas, has found two areas of his life where his talents and accomplishments have catapulted him to global recognition.

Born and raised in New Castle, the 64-year-old scientist/musician is a renowned human geneticist who ranks among the top 3,000 researchers in the world and has received many scholarly citations.

He’s also a pianist, singer, songwriter and recording artist whose music is heard nationally and throughout multiple other countries.

Blangero’s genetics research has been highly funded by the National Institutes of Health, where he is reported to have obtained more than $64 million in direct funding for genetic studies of common diseases such as cardiovascular and psychiatric diseases and diabetes.

Blangero’s hometown had a chance to appreciate his cultural side up close and personal this week at the Scottish Rite Cathedral, where he and his producer and other contributors presented his second soon-to-be-released CD, “Signs and Wonders,” to a select group of invitees, many of whom were his childhood and school friends.

A New Castle High School graduate, Blangero grew up on Seventh Street in Mahoningtown, always sporting a full head of long, curly locks of hair. Music was always in his soul his having grown up with familiar hymns, gospel and classical music He started playing the piano when he was five, he said.

But music wasn’t in his career vision when he went to college at Youngstown State University. He originally majored in anthropology. He switched directions and enrolled in Case Western University in Cleveland where he attained his doctorate degree in genetics. From there, he moved to San Antonio, Texas, to pursue his career in the intricate science of studying cells.

“That’s been my real joy for years,” Blangero said, “doing research and finding genes for complex diseases and currently, algorithms.”

Blangero currently is a professor in the Department of Human Genetics at the University of Texas Rio Grande Valley School of Medicine in Brownsville, one of the newest medical schools in the country, he said. He also is also director of the Genomics Computing Center at the South Texas Diabetes and Obesity Institute.

Additionally, he is director of the San Antonio Family Heart Study, and has played a major role in organizing the construction of the 11,000-processor computer cluster MEDUSA, which he and his collaborators use for genetic research at Rio Grande Valley.

Before joining the university, he worked at the Southwest Foundation for Biomedical Research. His research his included a project focused on studying the function and structure of the human brain which he collaborated with David Glahn of Yale University. He has also studied the genetic and environmental causes of diabetes and fatty liver disease among the Mexican-American population in South Texas.

“I’ve been very fortunate in my career,” he mused. “I’m far better known as a geneticist than as a musician.”

But music was always an integral, but sometimes dormant, part of his life. When he was 14, he joined the rock band Harlequin that played primarily in the Pittsburgh area. He started composing and singing his own music with the group.

During college and his career, “I gave up music for quite awhile,” he said. He decided 25 years ago to get back into it, and started playing live blues with bands in San Antonio.

His friend, Nick Katona, heard demos of songs Blangero had written, and two years ago, he created PeacockSunrise Records, and signed Sun King Rising, which bears a logo of a sun with Blangero’s characteristic face. Blangero calls Sun King Rising his personal moniker his.

His cousin, Jeff Schuffert, also of Mahoningtown, became one of his sound engineers, and Jeff’s brother, Steve Schuffert, an accomplished guitarist and Nashville songwriter, plays on his albums.

“We were a musical family,” Blangero mused.

Two years ago, Blangero hired Ace Acker, who formerly played with the Youngstown area 1970s rock and soul band LAW. Acker produced Blangero’s first album, “Delta Tales,” released in October, 2020, which has about 13,000 Facebook followers and is big in Europe in the United Kingdom and Italy, and in Brazil, Blangero said.

Acker also was the producer of “Signs & Wonders,” due to be released Oct. 1 on CD, vinyl and streaming platforms.

Blangero describes his songs as a mixture of Southern rock and soul. Listening to them, one can detect flavors of a wide variety of artists and composers, such as Leon Russell, Pink Floyd, Claude Debussy and Aaron Cohen.

Blangero recalled the difficulties of recording the first album in January 2020, which was on the cusp of the COVID-19 pandemic lockdown. Coping with travel restrictions, he and Acker completed “Delta Tales” remotely, with 32 players and singers recording in multiple studios across the country.

“Signs & Wonders” was recorded live in Ambridge at Maplewood Studio. Acker assembled a five-piece band, a horn section and background singers, with David Granati as the sound engineer.

The album’s first single, “No. 6 Magnolia Avenue,” has a classic 60s/70s horn sound, reminiscent of Chicago, Spiral Staircase and Blood, Sweat and Tears.

Half of the “Signs & Wonders” album features a lot of brass and soul, while the other half rocks hard with Southern rock emphasis.

The premiere of the album included the presentation of a video featuring the song, “Free Will in China Blue.” The video was created by local videographer Dante Ludovici and features some familiar Lawrence County scenes, including a Wilmington Township horse farm.

The small audience was regaled with the playing of the entire CD before Blangero, dressed in all black with a red and black brocade vest, took to the piano, offering a few songs that he had written but no one had heard before.

“John Blangero was a lifesaving gift to me,” he said. “He showed up in my life from out of the blue in November 2018. He befriended, encouraged, and believed in me.

“Working with a genius like John has been an inexpressible blessing and an artistic joy,” Acker said. “John sings of things no other singers sing of. He tells untold stories. He kicks [butt] and he’s my friend.” 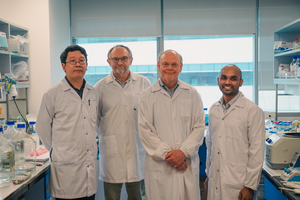 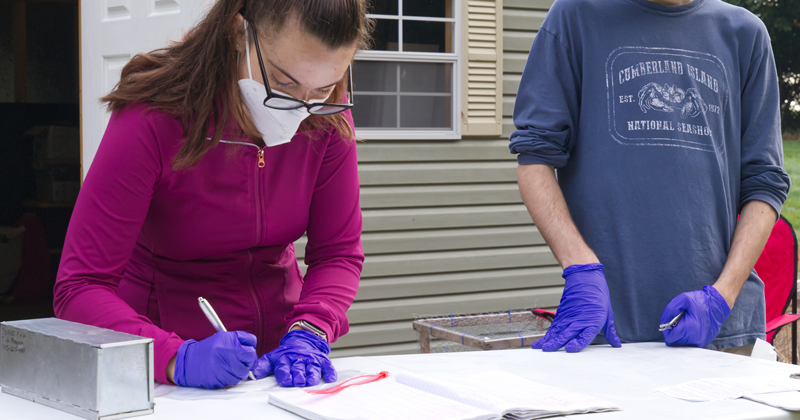 The root of Lyme disease