A new kind of “phase transition” in water was first proposed 30 years ago in a study by researchers from Boston University. Because the transition has been predicted to occur at supercooled conditions, however, confirming its existence has been a challenge. That’s because at these low temperatures, water really does not want to be a liquid, instead it wants to rapidly become ice. Because of its hidden status, much is still unknown about this liquid-liquid phase transition, unlike the everyday examples of phase transitions in water between a solid or vapor phase and a liquid phase.

This new evidence, published in Nature Physicsrepresents a significant step forward in confirming the idea of ​​a liquid-liquid phase transition first proposed in 1992. Francesco Sciortino, now a professor at Sapienza Università di Roma, was a member of the original research team at Boston University and is also a co -author of this paper.

The team has used computer simulations to help explain what features distinguish the two liquids at the microscopic level. They found that the water molecules in the high-density liquid form arrangements that are considered to be “topologically complex,” such as a trefoil knot (think of the molecules arranged in such a way that they resemble a pretzel) or a Hopf link ( think of two links in a steel chain). The molecules in the high-density liquid are thus said to be entangled.

Andreas Neophytou, a Ph.D. student at the University of Birmingham with Dr. Dwaipayan Chakrabarti, is lead author on the paper. He says, “This insight has provided us with a completely fresh take on what is now a 30-year old research problem, and will hopefully be just the beginning.”

The researchers used a colloidal model of water in their simulation, and then two widely used molecular models of water. Colloids are particles that can be a thousand times larger than a single water molecule. By virtue of their relatively bigger size, and hence slower movements, colloids are used to observe and understand physical phenomena that also occur at the much smaller atomic and molecular length scales. 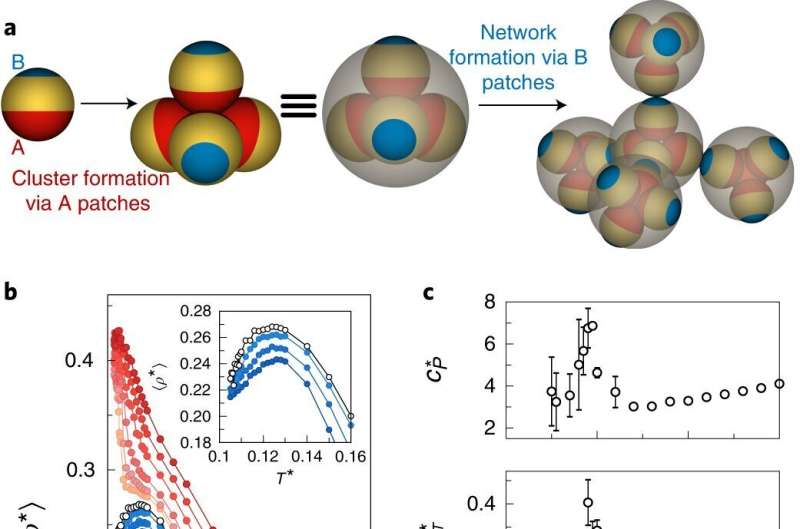 Thermodynamic anomalies and LLCP in colloidal water. a, Schematic of the hierarchical self-assembly of triblock patchy particles leading to a colloidal model of water. The two patches, labeled A and B, are of different sizes and form bonds of different strengths. The A patches (red) form stronger bonds than the B patches (blue) so as to encode two-stage assembly upon cooling. bThe evolution of the reduced density ρ⋆ as a function of the reduced temperature T⋆ for different reduced pressures P⋆where P⋆× 103 = 5, 6, 7, 7.5, 8.5, 9, 10, 12, 14 and 16. The arrow indicates the direction of increasing P⋆ . The inset highlights the density maximum for P⋆ × 103 = 5, 6, 7 and 7.5. cThe evolution of the reduced thermal expansion coefficient (α⋆PαP⋆{alpha }_{P}^{star}), isothermal compressibility (κ⋆TκT⋆{kappa }_{T}^{star}) and isobaric heat capacity (c⋆PcP⋆{c}_{P}^{star}) as functions of T⋆at P⋆= 0.0085 (close to the critical pressure). Error bars represent the standard deviation over five sets of Monte Carlo trajectories, each of 1 × 108cycles. dThe dependence of ρ⋆and the fraction of BB bonds formed (fb) on P⋆at T⋆= 0.105 and T⋆= 0.112. eThe distribution of the order parameter M for colloidal water (blue symbols), calculated using histogram reweighing, with T⋆≈ 0.1075, P⋆≈ 0.0082 and s ≈ 0.627, compared with the corresponding 3D Ising universal distribution (solid red line). Credit: Nature Physics (2022). DOI: 10.1038/s41567-022-01698-6

Dr. Chakrabarti, a co-author, says, “This colloidal model of water provides a magnifying glass into molecular water, and enables us to unravel the secrets of water concerning the tale of two liquids.”

Professor Sciortino says, “In this work, we propose, for the first time, a view of the liquid-liquid phase transition based on network entanglement ideas. I am sure this work will inspire novel theoretical modeling based on topological concepts.”

The team expect that the model they have devised will pave the way for new experiments that will validate the theory and extend the concept of “entangled” liquids to other liquids such as silicon.

Pablo Debenedetti, a professor of chemical and biological engineering at Princeton University in the US and a world-leading expert in this area of ​​research, remarks, “This beautiful computational work uncovers the topological basis underlying the existence of different liquid phases in the same network -forming substance.

“In so doing, it substantially enriches and deepens our understanding of a phenomenon that abundant experimental and computational evidence increasingly suggests is central to the physics of that most important of liquids: water.”

Christian Micheletti, a professor at International School for Advanced Studies in Trieste, Italy, whose current research interest lies in understanding the impact of entanglement, especially knots and links, on the static, kinetics and functionality of biopolymers, says, “With this single paper , Neophytou et al. made several breakthroughs that will be consequential across diverse scientific areas.

“First, their elegant and experimentally amenable colloidal model for water opens entirely new perspectives for large-scale studies of liquids. Beyond this, they give very strong evidence that phase transitions that may be elusive to traditional analysis of the local structure of liquids are instead readily picked up by tracking the knots and links in the bond network of the liquid.

“The idea of ​​searching for such intricacies in the somewhat abstract space of pathways running along transient molecular bonds is a very powerful one, and I expect it will be widely adopted to study complex molecular systems.”

Sciortino says, “Water, one after the other, reveals its secrets. Dream how beautiful it would be if we could look inside the liquid and observe the dancing of the water molecules, the way they flicker, and the way they exchange partners, restructuring The hydrogen bond network. The realization of the colloidal model for water we propose can make this dream come true.”

Provided by University of Birmingham