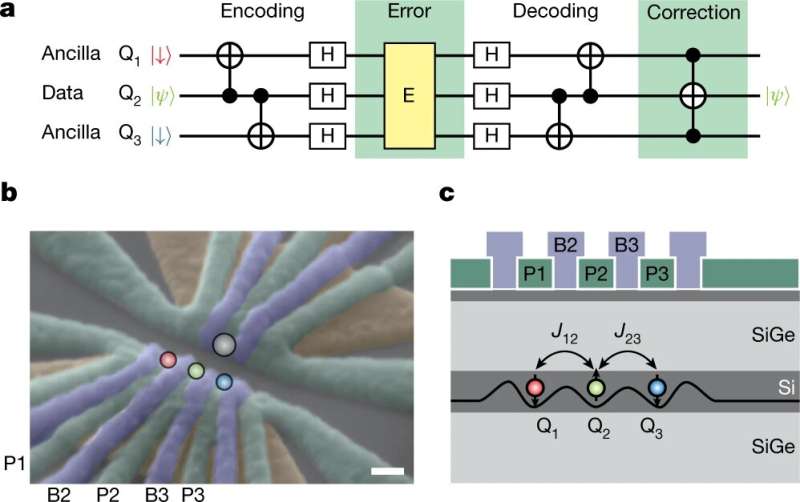 Three-qubit QEC and silicon-based three-qubit device. a. Outline of the three-qubit phase-flip quantum error correcting code. The two-qubit CNOT gates entangle the three qubits, then the Hadamard (H) gates rotate the qubit basis for phase-flip errors. The decoding is the inverse of the encoding. Finally, the correction is performed by a three-qubit Toffoli gate. b. Scanning electron microscope image of the device. Scale bar, 100 nm. The screening gates (brown) are used to restrict the electric field of the plunger (green) and barrier (purple) gates. The three circles (red, green and blue) indicate the position of the triple-quantum-dot array. A further quantum dot shown as the gray circle is used as a charge sensor. The gates P1, P2, P3, B2 and B3 are connected to an arbitrary waveform generator to apply fast voltage pulses. The microwave control pulse for electric-dipole spin resonance is applied to the lower screening gate. c, Schematic cross section of the device. The line in the silicon quantum well shows the schematic triple-dot confinement potential. J12 (J23) represents the nearest-neighbor exchange coupling between Q1 and Q2 (Q2 and Q3). Credit: Nature (2022). DOI: 10.1038/s41586-022-04986-6

Researchers from RIKEN in Japan have achieved a major step toward large-scale quantum computing by demonstrating error correction in a three-qubit silicon-based quantum computing system. This work, published in Naturecould pave the way toward the achievement of practical quantum computers.

Quantum computers are a hot area of ​​research today, as they promise to make it possible to solve certain important problems that are intractable using conventional computers. They use a completely different architecture, using superimposition states found in quantum physics rather than the simple 1 or 0 binary bits used in conventional computers. However, because they are designed in a completely different way, they are very sensitive to environmental noise and other issues, such as decoherence, and require error correction to allow them to do precise calculations.

One important challenge today is choosing what systems can best act as “qubits”—the basic units used to make quantum calculations. Different candidate systems have their own strengths and weaknesses. Some of the popular systems today include superconducting circuits and ions, which have the advantage that some form of error correction has been demonstrated, allowing them to be put into actual use albeit on a small scale. Silicon-based quantum technology, which has only begun to be developed over the past decade, is known to have an advantage in that it utilizes a semiconductor nanostructure similar to what is commonly used to integrate billions of transistors in a small chip, and therefore could take advantage of current production technology.

However, one major problem with the silicon-based technology is that there is a lack of technology for error connection. Researchers have previously demonstrated control of two qubits, but that is not enough for error correction, which requires a three-qubit system.

In the current research, conducted by researchers at the RIKEN Center for Emergent Matter Science and the RIKEN Center for Quantum Computing, the group achieved this feat, demonstrating full control of a three-qubit system (one of the largest qubit systems in silicon), thus providing a prototype for the first time of quantum error correction in silicon. They achieved this by implementing a three-qubit Toffoli-type quantum gate.

According to Kenta Takeda, the first author of the paper, “the idea of ​​implementing a quantum error-correcting code in quantum dots was proposed about a decade ago, so it is not an entirely new concept, but a series of improvements in materials, device fabrication, and measurement techniques allowed us to succeed in this endeavor. We are very happy to have achieved this.”

According to Seigo Tarucha, the leader of the research group, their “next step will be to scale up the system. We think scaling up is the next step. For that, it would be nice to work with semiconductor industry groups capable of manufacturing silicon -based quantum devices at a large scale.”

Science is on brink of a materials revolution – The Irish Times

Ethan Siegel Sells “Something from Nothing”