Cramming multiple pairs of shoes into a vacation suitcase, twisting and flipping them into different arrangements to fit every pair needed, is a familiar optimization problem faced by harried travelers. This same problem is well known to engineers—when given a number of objects with a particular shape, how can they be packed into a container? And which pattern will that packing form?

Unlike the contents of a suitcase, the way in which microscopic particles are packed together can be used to engineer the characteristics of the materials they form; for instance, how light or electricity travel through. Materials scientists have long studied how assembling particles in a confined space can be used as a tool to give materials new abilities, but how particles with unique shapes interact with a barrier remains poorly understood.

A new study by researchers in Cornell University’s Department of Materials Science and Engineering used computer simulations to show how the assembly of vertex-truncated tetrahedra—a particle shape that has four hexagonal faces and four triangular faces—is affected when confined inside a spherical container. The findings, published in the journal Soft Matteroffer materials scientists a new method for controlling the assembly structure and characteristics of the resulting material.

“It used to be that theorists would primarily do simulations with spheres because most particles are roughly spherical, and computationally that was easiest,” said Rachael Skye, doctoral student and first author of the study, “but experimentalists keep coming up with exciting ways to control shape and now they can make colloidal particles like tetrahedra, octahedra, or cubes. With advanced computing power, we can simulate these shapes, but also go further and predict what new, not-yet-synthesized particles might do.”

To help fill the knowledge gap in how these particle shapes assemble in confinement, Skye and the study’s senior author, Julia Dshemuchadse, assistant professor of materials science and engineering, simulated tetrahedral particle assemblies in spherical containers. Each held as few as four particles and as many as 10,000. In each simulation, the container would shrink as much as possible with the programmed number of particles inside it.

“This simulation is mimicking how some colloidal materials are produced, with particles placed inside a liquid droplet which contracts as it evaporates,” said Dshemuchadse.

These particles can fit together in a number of ways, but there are two distinct motifs: aligned, with hexagonal faces adjacent, or anti-aligned, with a hexagonal face adjacent to a triangular one. Each motif drives an overall structure that conforms to the containers’ borders differently. 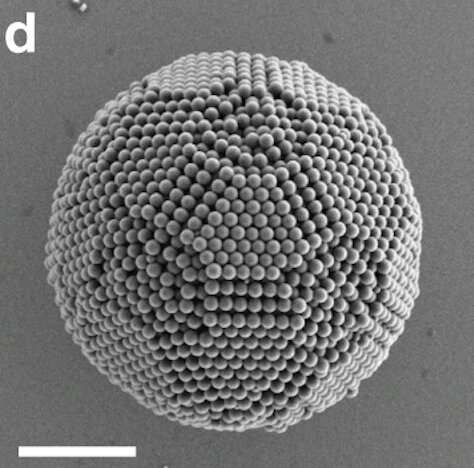 “If you have these anti-aligned particles, then you can form flat layers really well and stack infinitely wide, making a really good crystal,” said Dshemuchadse, who added that this motif is favored when simulating large numbers of particles because the larger container size has smaller curvature, “but if you have the particles aligned, the structure can form a curved motif that fits better into a spherical shell. At small numbers of particles, the aligned motif is favored because the smaller containers have large curvatures.”

The findings provide materials scientists with a method to grow large crystals in systems of particles that do not typically assemble into ordered structures. Other methods of achieving a well-ordered crystal involve techniques such as “seeding” the material with particles constrained in specialized orientations that drive the corresponding structure, but such methods require fabricating new types of particles, which would be less straightforward in an experimental realization of these systems. In contrast, forming crystals on a flat substrate is often the norm, and this study points to how this technique may benefit the resulting structure.

“Colloidal crystals tend to be small and full of defects, but in order for them to be useful in most applications, they need to be fairly large and defect free” Skye said. “The idea is that by choosing your container or wall correctly, you can make a crystal that is much bigger and of better quality than you otherwise could.”

Skye added that in fields such as plasmonics and photonics, this assembly technique can be used to orient the same particle in two different ways, enabling engineers to create devices that have different responses based on the chosen assembly formation.

Bottom-up construction with a 2D twist could yield novel materials