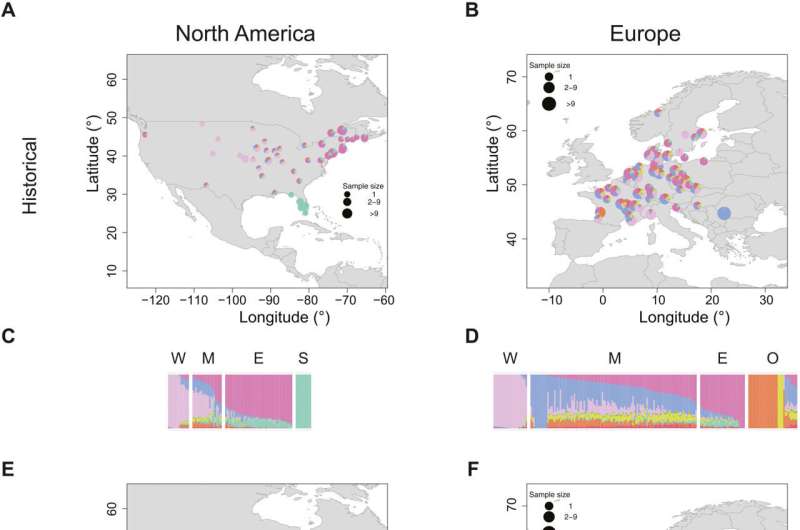 Admixture proportions for A. artemisiifolia populations. The NGSadmix run of a joint analysis including all samples with the highest likelihood for K = 9 was used for plotting. The same color scheme was used across all panels. (A, B, E, and F) Admixture maps. Samples within 100 km were grouped together, and the average ancestry across those groups was plotted. If samples were grouped together, then ancestry values ​​were plotted at the centroid of the group. (C, D, G, and H) Admixture barplots. Each bar represents one individual. Samples are grouped on the basis of their geography: W, West; M, Mideast; E, East; S, South; O, other. (A) Historical North America. (B) Historical Europe. (C) Historical North America. (D) Historical Europe. (E) Modern North America. (F) Modern Europe. (G) Modern North America. (H) Modern Europe. Credit: Science Advances (2022). DOI: 10.1126/sciadv.abo5115

Invasive species drive the global biodiversity crisis and some, such as ragweeds, even damage our health.

Until now scientists have been unable to determine what makes this particular invasive species so successful.

But a study published today in Science Advances outlines the genomics of plant invasion and illuminates why ragweed (Ambrosia artemisiifolia) is such a powerful foe.

Researchers generated the largest collection of historical plant genome sequences to date, representing samples from two continents and from over 190 years ago in one of the world’s worst plant invaders, common ragweed.

A co-senior author of the international study, Dr. Kathryn Hodgins from the Monash University School of Biological Sciences said the study is unique because the research team investigated the influence of microbial communities on the success of invasive plants by tracking the DNA of both the microbes and plants over unprecedented spatial and temporal scales.

“We chose to focus on the ragweed as it’s an extraordinarily successful noxious weed that is native to North America with a 200-year history of global introductions,” Dr. Hodgins said.

“It ranks as the 12th worst exotic plant in Europe and causes increasingly negative economic and public health impacts because of its prolific production of highly allergenic, windborne pollen,” she said.

“This study has provided insight into the genetic changes that have allowed ragweed to become a huge pest in Europe today.

“The species is also found in Australia and we are now looking at the genetic changes that have allowed it to survive here and whether we should be worried about how it will evolve in the future with climate change.”

Common ragweed is native to temperate North America but was introduced to Europe in the 1800s through imported seeds and contaminated horse feed. Recent years have seen its expansion across the continent. A major source of introduction is contaminated bird feed.

Many alien organisms die before causing harm because they can’t adapt to new surroundings, why does ragweed thrive? The answer is in the DNA.

The research team analyzed 655 ragweed specimens, 308 of which were from heraria. Some were 190 years old and from when the plant was first introduced to Europe. This allowed scientists to trace ragweed’s evolution in Europe. This information helped them understand today’s massive spread.

“We found that once ragweed arrived in Europe, the genes involved in defending itself against enemies evolved the most, helping the plant to flourish,” said Dr. Hodgins. “The bacteria infecting the plants also changed. Ragweed’s escape from disease causing pathogens found in North America may help explain its extraordinary success in Europe.”

“Our study highlights that multiple factors facilitated the invasion success of ragweed. This is likely also the case for other invasive species.”